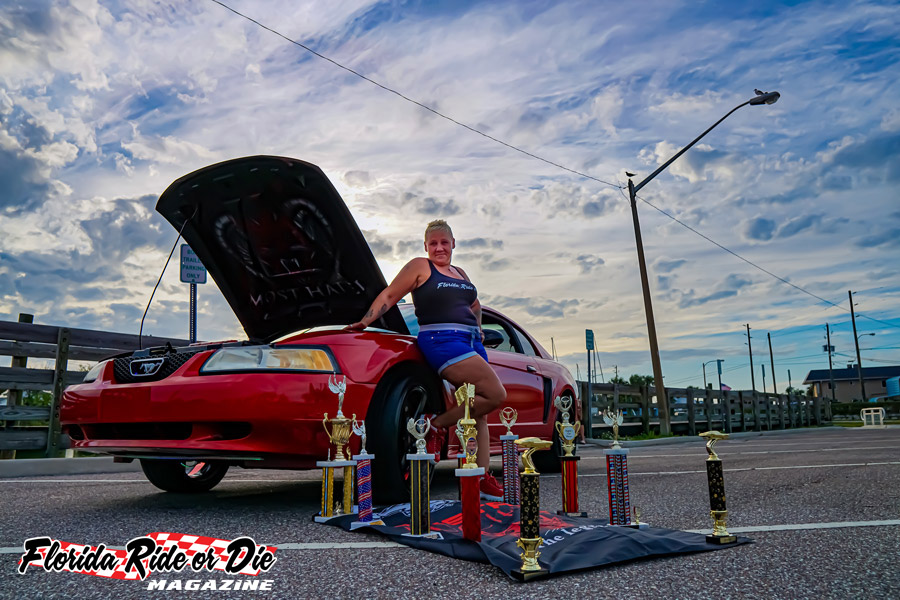 My name is Jaye.
My club: United We Roll Florida.
Car: Lucifer

I have been a car enthusiast and into bikes since I was little. My dad rode in Motocross since the late 70’s so I have always been around cars and bikes. It wasn’t until I got married that I got into the car scene more. I bought a 2000 base V6 Mustang and it was off from there. My husband is a master mechanic and I kept bugging him to put a V8 engine in it. Finally, he said yes! I was so happy.

The changing of the V6 to the V8 4.6L was hell. It took about 2 months, that is because unfortunately my husband suffered a heart attack and then later on a stroke during the build. I am thankful to say my husband is better now.

After the car was finished, I decided to name him Lucifer because of all the hell he put us thru building him. Lucifer is now a V8 4.6L. I also had a customized seat delete done by Delinquent Designz, Envyus Airbrusing and Gotham Designz. I then had underglo, wheel and engine lights done by Delinquent Designz as well as customized airbrushing under the hood by Envyus Airbrusing.

I then decided after everything was done to create my own car club. It’s called “United We Roll Florida” I accept all makes, models, bikes, slingshots etc. You can find my club on Facebook –  United We Roll Florida to join. I have a great bunch of people in my club. We go to a lot of shows, cruise ins etc.

I have won a lot of trophies with my car as well as with my club. It has been quite a fun journey and I can’t wait to see what’s to come.